Capitalism vs. the Climate., The Future of Mankind, Visions of the future.

I realize that restricting technology might be an unrealistic demand to impose on the up and coming generation but Smartphones are killing the planet faster than anyone expected.

Electronic waste is a huge problem around the globe.

The worst-case scenario is that electronic trash winds up in unregulated or mismanaged heaps, slowly leaking corrosive chemicals into the soil and water table. 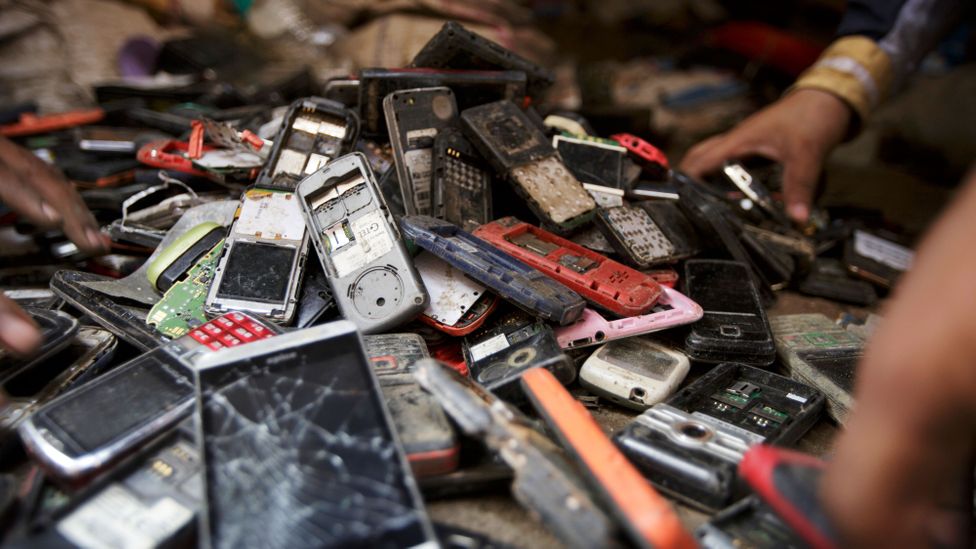 All phones require 16 of the 17 rare-earth metals.

This is more than just an amusing detail about the device that never leaves your side.

Suddenly your smartphone is looking a lot more valuable than you might think. Pocket-sized vaults of precious metals and rare earths.

A typical iPhone is estimated to house around 0.034g of gold, 0.34g of silver, 0.015g of palladium and less than one-thousandth of a gram of platinum. It also contains the less valuable but still significant aluminium (25g) and copper (around 15g).

One million mobile phones could deliver nearly 16 tonnes of copper, 350kg of silver, 34kg of gold and 15kg of palladium.

And that’s just the start.

Smartphones also contain a range of rare earth elements – elements that are actually plentiful in the Earth’s crust but extremely difficult to mine and extract economically – including yttrium, lanthanum, terbium, neodymium, gadolinium and praseodymium.

Despite the recycling programs run by Apple and others, currently less than 1% of smartphones are being recycled.

With an estimated of 3.6 billion using smartphones tech’s carbon footprint is beyond what any one designer, one company, or even one government regulator can contain. Those 3.6 billion smartphone users upgrade to a new phone roughly every 11 months.

But that is not the main problem. It is the building a new smartphone–and specifically, mining the rare materials inside them–represents 85% to 95% of the device’s total CO2 emissions for two years.

Even as the world shifts away from giant tower PCs toward tiny, energy-sipping phones, the overall environmental impact of technology is only getting worse. They’re more or less disposable.

That’s half as large as the carbon impact of the entire transportation industry.

The list of ICT components is exhaustive, and it continues to grow. ICT’s importance to economic development and business growth has been so monumental, in fact, that it’s credited with ushering in what many have labelled the Fourth Industrial Revolution. 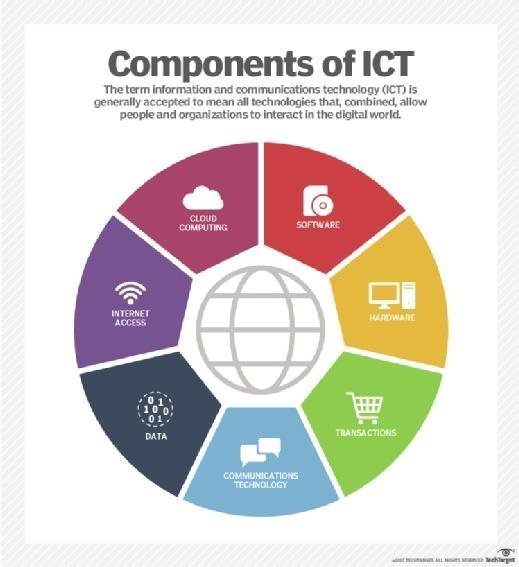 The overall largest culprit with regards to CO2 emissions belongs to servers and data centres themselves, which will represent 45% of ICT emissions by 2020. Although there is no single, universal definition of ICT, the term is generally accepted to mean all devices, networking components, applications and systems that combined allow people and organizations (i.e., businesses, non-profit agencies, governments and criminal enterprises) to interact in the digital world.

Mobile apps actually reinforce our need for these 24/7 servers in a self-perpetuating energy-hogging cycle. More phones require more servers. And with all this wireless information in the cloud, of course we’re going to buy more phones capable of running even better apps.

The future will only get more dire if the internet of things takes off and many more devices are hitting up the cloud for data.

Wearable devices, to home appliances, and even cars, trucks and airplanes. If this trend continues . . . one can only wonder on the additional load these devices will have on the networking and data centre infrastructures, in addition to the incremental energy consumption incurred by their production.

The average teen spends about two and a half hours a day on electronic devices.

Recognising that changing consumer behaviour is probably the least viable option, we need to come up with something better.

Governments should pass a law that requires all companies manufacturing these deceives to make a cash refund payment to encourage the return of the devices for recycling.  which could make it the ultimate cottage industry,

The internet is omniscient, our phones omnipotent, and together they demand and are destroying our values however there is life beyond the phone, but experiencing its richness requires mindfulness and discipline.

All human comments appreciate. All like clicks and abuse chucked in the bin.

I recently came across this app that sums up where we are with – CLIMATE CHANGE.

God knows how many meeting we now have had of world leaders when it comes to Climate Change. From the UN to the Gs’ and Climate Summits, and it still remains beyond their comprehension that to reduce Carbon Emissions we must put a halt to producing energy with fossil and gas resources.

We have are unenforceable Promises,  Declarations,  Proposals Agreement,  Accords, Groups and Organisations under ever letter of the alphabet turning a blind eye to the raw fact that carbon has being turned into a product to be traded.

This is a trading system through which countries / corporations can buy or sell units of greenhouse-gas emissions in an effort to  either meet their national limits on emissions or off set their emission’s  while they continue will – nilly to pump carbon into the atmosphere.

. The Kyoto Protocol assigned a unit of emissions payment to equal to 1 metric tonne of CO2 equivalent.

Like REDD:  Reducing Emissions from Deforestation and Forest Degradation with Cop 27introduced Sovereign Carbon Credits paving the way for private trading and financing of nature.

You dont have to be a genius to understand that temperature rise is only the beginning of the story.

The consequences of climate change now include, among others, intense droughts, water scarcity, severe fires, rising sea levels, flooding, melting polar ice, catastrophic storms and declining biodiversity, mass migration by both animals and humans  that will eventually led to more wars.  Because the Earth is a system, where everything is connected, changes in one area can influence changes in all others.

There is no doubt that  Climate action requires significant financial investments by governments and businesses. But climate inaction is vastly more expensive.

So instead of worthless invisible funds why not give non repayable grants to every house hold to install solar panels.

To get to net zero emissions by 2050 it is not by giving Earth Shot millions to projects that deserve recognition in their innovative  to tackle Climate Change but to arm the peoples of the world to do something positive by converting to Green energy,  starting now.

Why not because the capitalist system is still between two stool profit for profit sake or profit for sustainability.

Progress is a metaphor

We know exactly what it’s for

But wonder if it can.

The next best thing to knowing a fact is said to be where to find it;

But more than that, its how to act, once you have truly defined it.

SO WE ALL KNOW THAT it is critical that all mitigation and adaptation policy are underpinned by not burning fossil fuels that are generating greenhouse gas emissions and methane even it there are offset by paying a few dollars more for your Flight or breathing.

Of course one would be naïve to think that Government’s who’s revenue comes from the use of energy are going to cut themselves off from this revenue by converting the production of energy to free for all. The primary source of revenue is taxation.

THIS IS WHERE THE  PANDORA  BOX.OPENS.

The problem is that these renewable sources aren’t super reliable and at present there is no way of storing the energy other than directing it into the Grid or private batteries that need to be attached to the grid.

There is no problem (in principle) with building enough solar panel arrays, wind farms, tidal, wave and geothermal energy plants to power our planet. There is nothing here that we don’t already know how to do. The only problem is with funding it and getting people to accept it.

We at the moment except.

Nuclear power plants: Highly stable and reliable. They are “dirty” because of the nuclear waste hype. There is also problem with uranium mining and processing as well.

Water powerplants: very fast, reliable. Their drawbacks are huge or humongous dams for high-power ones or low power output; disruption of the stream.

Solar heat powerplants: Huge area consumption for mirror fields plus tower in the sky. Suitable only for scarcely populated areas.

HOWEVER ITS NAIVE TO THINK THAT WE CAN HAVE GREEN ENGERY TOTAL FREE OF EMMISIONS.

With the last one in Egyptian promising trillions to countries that can claim Punch’s Pilot absolution that its not their fault.

Energy is there and all we can do about it is change the forms. It is a direct follow of the conservation of energy.

There is no thermal engine that produces more (mechanical) energy than it consumes. Even solar and wind need raw materials.

Solar panel takes a little less than a decade to produce as much energy as was used to make it.

Anytime one is using energy, they are using it on the environment’s behalf.

IN A IDEAL WORLD WE COULD CONVERT tracts of unusable desert that has no significant ecological value and which gets uninterrupted sunshine for 300+ days of the year that could be covered in solar panels.

I have advocated that to tackle Climate change Governments must impower their people to do so.

Non Repayable grants to insulate their homes and install solar power would be a good start.

You have to start on time as nothing in the universe will produce more energy.