Algorithms., Capitalism, Capitalism and Greed, Capitalism vs. the Climate., Climate change, Coronavirus (COVID-19), Extinction, The Future of Mankind, Visions of the future.

IS PROBABLY THE MOST USED TERM IN CURRENT DAY CONVERSATIONS – POLTICALY OR OTHERWISE.

Against the background of a doubling of the world population every thirty-odd years, it’s no wonder that we find ourselves facing intractable problems and we need to do something about them.

We now live in a world of lip service, (used by silent data collection – profit-seeking – algorithms that could not give a shit), are run by corporations, the manipulators of the need-to-do, in order to promote consumption, whatever the cost, long term, or short term.

The recycling of plastic alone is an example. We are told that we need to recycle plastic by companies that continue to produce it in the trillions of tons.

I am not sure about you, but I am a little ashamed to be human right now.

Because none of our world organizations, governments, the current crop of leaders have at their core a true understanding that we all live and rely upon the planet to be able to kill each other, love each other, and propagate more of us.

With the COVID-19 pandemic shining a light onto societal and economic systems all across the world, exposing the flaws of a capitalist society we are still driven by greed, religious beliefs, social media, advertising.

The pandemic-induced health crisis has rapidly ignited an economic crisis with yet unknown consequences for financial stability, and all is being played out against the backdrop of a climate crisis that cannot be addressed by “business as usual.

We are now facing problems all of which have to be resolved at the same time, otherwise, we will simply be solving problems in one place while creating new ones elsewhere.

So golly gosh the COVID-19 crisis is exacerbating all these problems and what are we doing about it other than convene world leaders in a virtual format to seek action and solutions for a world in crisis. (The united nations on the 17 Sep- 5 Oct)

You can rest assured what we will witness as we did with the Paris climate change is countries promising virtual undertakings, with no means of enforcement, or transparency.

Some years ago 150 countries set a list of goals to be achieved by 2020 to improve the world’s biodiversity, not one was achieved and humanity is now at a crossroads.

Because countries will virtually promise whatever when it does not cost them arm and a leg. Virtual multilateralism is a joke in the extreme when we need value creation instead of value extraction when the pillars of our world are being shaken to the core.

The COVID -19 will cost trillions while reversing climate change will save trillions.

We all know that we need to grasp the opportunity to fix the system. If we don’t, we will stand no chance against – an increasingly uninhabitable planet – and all the smaller crises that will come with it in the years and decades ahead.

What can we the people of the world do?

We are incapable of acting as one for obvious reasons, but every one of us needs a habitable planet. We could weaponize our buying power to accelerate actions on biodiversity for sustainable development.

By doing so the world of profit would change.

What can countries do?

To realize that we are not as unique as a species and that the risk extinction has never been greater.  Stop god wobbling as there has been nothing like what we are now looking at in human history.

The like hood of either of the above happening is zilch.

So the world of profit has to be taped into, in order to reboot the numerous we need to do.

(See the previous posts on a World Aid Commission of 0.05%)

We need to rise up and speak up!

So all I’m saying is that communication needs to start now not tomorrow.

Yes we are all different and what we do with our differences needs to make a difference.

Never in history is such a question more important. Unfortunately, we live in a world of distractions.

In my previous post to this one, (THE HARDEST THING OF ALL TO SEE IS ALREADY THERE.)   I attempted to say that the truth has no past.

By this, I meant that the truth is reality, and therefore religion and the state must be separated.

Only then can one hope for value with the same value or worth for all, or almost all, people. A value is considered universal when it goes beyond laws and beliefs; rather, it is considered to have the same meaning for all people and does not vary according to the societies that have evolved.

In fact, cultural relativism is a belief that opposes the existence of universal values; proposes that a value can not be universal because it is perceived differently in each culture.

Given the ambiguity of the term, the existence of universal values ​​can only be understood as the values ​​that have to do with the basic requirements of the human being. Such as Fresh Air, Freshwater, Food, Clean Energy.

Now with AI infiltrating our lives, it seems that the faster we travel, the importance of there place is getting lost.

It seems because there are no universal moral values, our command of science simply can not coexist with morals, and our internet fed imaginations

We talk about the central issues of our times: A universal pandemic, an economic depression, continuing wars, climate change, migration, artificial intelligence, rising inequalities, erosion of the power of the vote, loss of individualism, loss of connection to ecosystems, to mention just a few of the problems to define any values that are universal.

We have many governments doubling down on the blame game and brinkmanship.

We have bioengineering which alone is now much greater danger than a nuclear war.

We have the maldistribution of wealth.

We have world leaders unwilling to see beyond the next election.

We have the extinction rebellion.

We have non-transparent digital data.

We have a population of 7.7 billion

We have extreme weather and biodiversity loss.

I ask myself why is it that with so many of us tryin’ to improve society, not that much changes but I hope that we don’t make changes to satisfy the noisemakers.

Rather than separating one problem from another, we need to connect them.

> How do we the current guardians of the planet achieve a balance between living our lives and the life of the planet, that allows us to live them in the first place.

It is no longer that logic alone will solve the problems, nor protests, or political will but within functional societies, we do still have the ultimate weapon – VIEWING AND BUY POWER  and both are available in every type and form of human culture.

They must be added to the deep emotions of religion if we are to achieve change.

The life of now economies and pay later must come to an end if we are to avoid the hazards of the future.

If Extinction Rebellion wants to be heard, it will not do so on top of bamboo towers stopping newspapers to be deliveries, or sticking themselves to windows.

It must use social media digital platforms to encourage its supporters to use their buying power to attack profit for profit sake.

PROFIT WITHOUT CONTRIBUTION TO UNIVERSAL VALUES IS THE ENEMY. 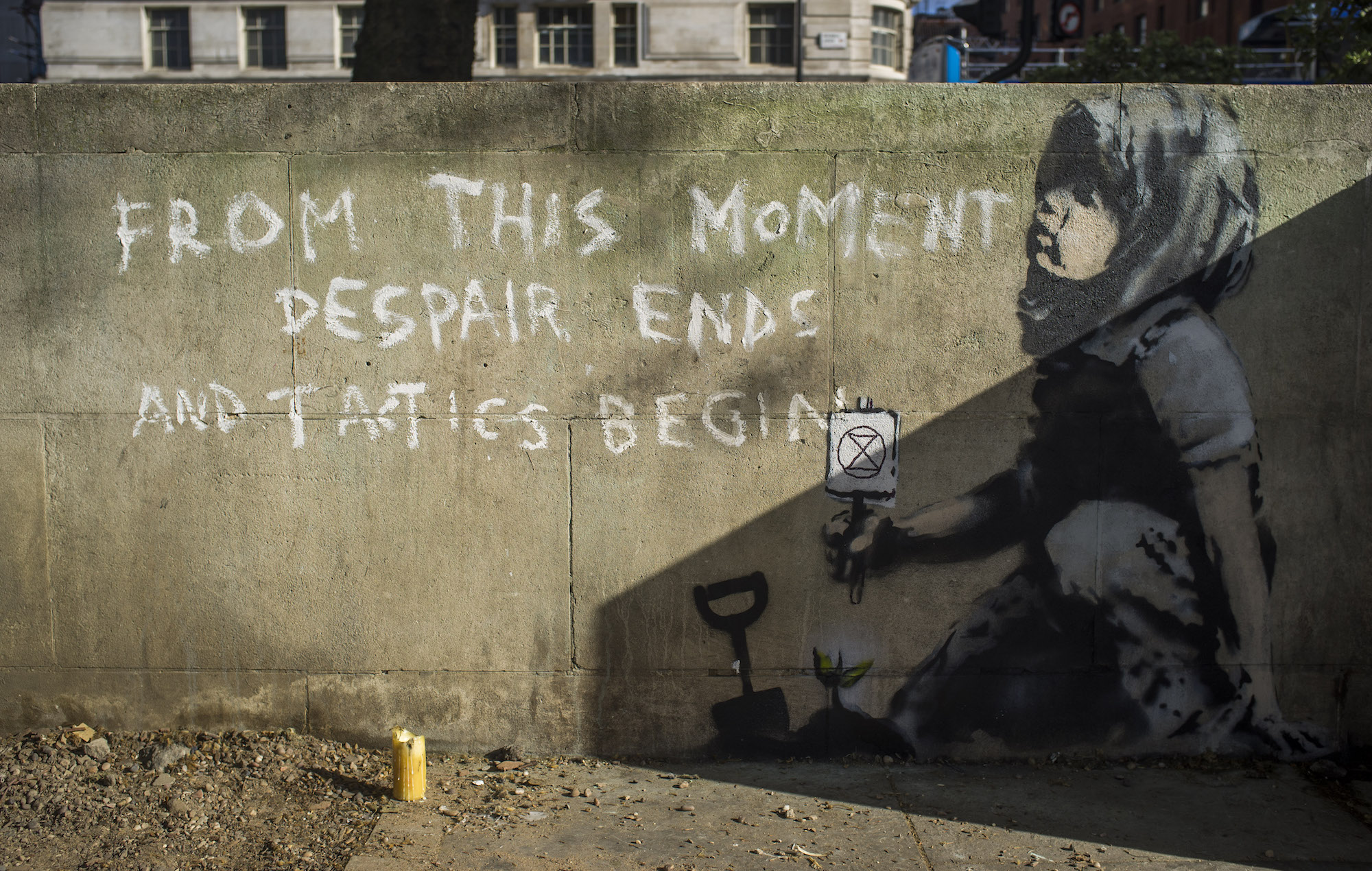 With these weapons, we can effect change and avoid the hazards to come.