The British Empire was the largest in history existing from the sixteenth century into the twentieth century.

Unfortunately, it squandered all that it acquired on a victorian class system. 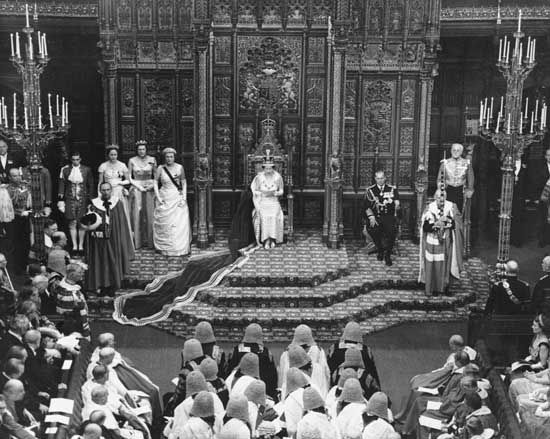 It killed with famine, sword and fire more people than Genghis Khan, Attila the Hun, Hitler or Stalin.

In the defence of its imperial interests, it precipitated in two World Wars.

Now it is presiding with “Mad cow disease” it’s very own self-destruction.

a progressively globalized world in which some claimed that the individual

Queen Elizabeth II in 1992, referred to the year as the royal family’s “annus horribilis.”

Because along came a five-year austerity plan aimed at reducing the country’s massive deficit, which had been fueled by bank bailouts and stimulus spending in the wake of the 2008 financial crisis and resultant recession which resulted in 52 per cent of voters opting to leave the EU, (making the United Kingdom the first country to ever do so)

Manufactured by Magie Thatcher who turned the market into replacing society as the model of state governance.

Not surprising as worldwide political culture has in fact transformed from one based on class to a new sort of populist, demotic politics, shaped at least as much by the mass media, especially the popular press, as by the politicians.

A sort of firestorm has broken out not just in Brazil but all over the world.

Because the relationship between public culture and consumer capitalism, while the very Earth itself is struggling with climate change has been close, in many ways the one constantly trying to outguess the other.

This game of one-upmanship, marked by ironic knowingness, has been labelled “postmodern, Brexit or Donal Trump trade wars”.

It points to the growing understanding of the relative nature of truth, itself a reaction against the prevailing supposedly “modern” certainties of the 20th century (reason, freedom, humanity, and truth itself), which indeed have often had and are having appalling outcomes.

However, it is a sign of the times that these antifundamentalist currents, themselves critical of much of Western culture, emerged at much the same time as new fundamentalisms emerged in the forms of American neoconservatism and certain strains of radical Islam. The ferment of intellectual and cultural changes involved are inextricable from the massive changes underway in the transition to the novel forms of society made possible by new information technologies.

What the Smartphone and Social Media have and are doing since the 1960s onward for Africa are also unravelling England and the EU with the perception of poor economic performance and calls for the modernization of not just for British society and the British economy but the EU and the world at large.

Both England and the European Union need to reform.

Optimism only carries you so far.

History rhymes rather than repeats are what is required.

A society where elites are widely loathed, where the political parties are polarized by demographic echoes is on the brink of collapse.

Now as then — much more now than then, in fact — there is a pervasive mistrust of institutions, a sense that governments are rotting from the head down.

The abject failure of rulers in improving human values has resulted in a downgrading of human to sub-human levels with a race to expect dishonest money is the net result of the ultimate degradation of society.

How do you trick someone into giving you something they have?

First, you offer them something worthless, while convincing them that actually much better than what they have. Second, you convince them that what they do have is worthless.

This is a typical approach used by both con artists and governments.

These huge scams are just diversions from the ultimate crime Climate change.

Our survival instinct has to quickly override our conditioned naiveté and passivity that has been bred into us. We are not just threatened as countries but as species at the same time.

The thin veneer of civilization that we all depend upon on a daily basis is disappearing at a staggering pace and its not just the melting of ice.

The question now is.

Do we follow the trodden path where we only find all the grass eaten?

Creativity and imagination are what is needed as we are not getting across the problems of probability.

We must know the facts. We need a world brain bus.

Who is more likely to embrace the marginalized, to work for the disenfranchised?

Who will work for those of all backgrounds, all races and ethnicities, all religions, sexual preferences, gender identities?

Who will work to promote respect and equality for all people in the World?

Who sends a message that I want our children to believe in?

The rich and the poor, the entitled and the marginalized—they all make up the threads that a country needs to weave a unified society. When not include we weaken the material that fabricates our entire fabric of the world.

There has never been such a thing as an empire only a company called East India Company merchants. The British Empire did not exist in the Middle Ages. In the early Middle Ages, England was part of other empires:

The British Empire was a commercial, not a military or political one.

Originally, holding an empire was about power. Throughout history, kings and queens have invaded territories in order to gain strength and power. With colonies, a country gains space, a larger army, more trade markets and the chance to make money out of whatever resources are on offer in them.

The formation of the empire was thus an unorganized process based on piecemeal acquisition, sometimes with the British government being the least willing partner in the enterprise.

An ‘Empire’ is a group of countries ruled over by a single monarch or ruling power. An empire doesn’t need an ’emperor’. The British Empire comprised of Britain, the ‘mother country’, and the colonies, countries ruled to some degree by and from Britain.

(British Empire, a worldwide system of dependencies—colonies, protectorates, and other territories—that over a span of some three centuries was brought under the sovereignty of the crown of Great Britain and the administration of the British government.)

To this day Britain’s ‘cultural imperialism’, suggesting that it was based on nationalism and racist scorn for other people.

With a handshake and the commitment “On the word of an Englishman,”
Captain James Cook claimed it for the British crown.In the century 1815–1914, 10 million square miles of territory and 400 million people were added to the British Empire. By the British Empire Exhibition of 1924, Britain was the ‘Mother Country’ of a worldwide empire which covered a fifth of the land in the world, and Britannia ‘ruled the waves’.

Sorry but Empires have benefited no one nor will any future trade deals that are not attached to sustainability do anything to resolve Climate change.