Coronavirus (COVID-19), The Future of Mankind, Visions of the future.

If one takes a look at the state of the world which has gone through two world wars, numerous pandemics, natural disasters, you could say that its present state all boils down to us, our sense of belonging, our values, our separate cultures, greed, and power.

There is little point at this present moment in us dragging up our past history to ANSWER these questions other than it shows that colonization and slavery contributed to the world’s woes and that we are unable to act as one.

There is no hope of reducing co2 emissions until we understand what being a human being means.

Until we begin to understand each other there is no hope of tackling any of the current world problems.

So in this post, I am concerned with what has happened in recent times to produce the current century of a world preoccupied with crisis management.

Without understanding that Muslims believe that Allaha is the ultimate arbiter of their existence 9/11 was rightly or wrongly declared an act of war against Iraq.

Since then we’ve all been living in the shadow of the World Trade Center that unbridled the economic, cultural, and military power of the US –  America First.

The result is continuing wars Iran, Syria, Yemen, Afghanistan that are not clashes of civilizations but a clash of ideologies, values, and cultures.

It has been referred to as the world’s “most intractable conflict”, with the ongoing Israeli occupation of the West Bank and the Gaza Strip reaching 52 years.

There can be no peace between Muslims and Non-Muslims because what is happing in Israel goes beyond it.

The world is now preoccupied with crisis management so even if the Palestinian case is settled it won’t stop there.

Worldwide wide it is consumerist capitalism versus religion and tribal fundamentalism.

So if religion determines what we believe what does race tell us?

Nothing when it comes to  COVID-19 it is non-races no matter whether you are Muslim or Christian the price of faith means nothing if you are dead.

All of us no matter what race you are, Black or White, Christian, Jews, Muslim,  Buddhist, Hindu, call ourselves after the country we are born in only if the expression of religious beliefs is enshrined in the countries constitution with equal rights and freedoms. Where one can be our race and practice our religion.

A sense of self maybe?

Perhaps it is a race that makes us different from others.

The Irish were considered as being subhuman to the British many years ago before the Great Famine in the 1800s.

Lived segregated cultural traditions do not work. 700 hundred-odd years later, even in a Europen union setting Northern Ireland remains a divided society by religious beliefs, and a border created by colonization.

If we were paid a visit by another race that was intelligent to get here in the first place they would not give an F…  what race we were or had been.

Not until the human race understand that is one race will there be any hope in addressing the present problems we all face.

This will remain so till there is a solution to the Israelis and Muslim Palestinian conflict which in my opinion can now only be solved with a one-state solution, not two-states which has no hope of removing the inherent flaws and injustices or resentment of both sides.

All are intertwined forces that are both tearing apart and bring together the world.

What am I saying here is that the Middle East conflict is not just over religion or race it is also over land.

The 9/ 11 atrocity claimed nearly 3,000 lives and shocked the world but now many people are unable to remember the date of the tragedy – 11 September 2001 – 19 years ago the beginning of the Iraq invasion. An invasion that totally and utterly did not understand that Islam is not their religion, it is their life and remains so to this present day.

Instead of world leaders making an effort to prevent the Iraqi invasion according to Mr. Bush, there were no options but to use force which has now lead to one of the most inhuman periods in our recent history.

On top of this, we now have a world pandemic, climate change, America, and Britain first, the erosion of any long term policies by social media, the smartphone, and unregulated artificial intelligence, with religion shrinking in a digital world run by Five Titanic digital companies, run for profit.

It might not be possible to carry on in a world of two deities God and Allah.

If you ask me it’s all ridiculous the last ones standing to go to heaven and who will be there to greet them, is God, Allah, or Jesus?  It just doesn’t make sense, intellectual, religious-philosophical, or any other sense.

The world whether it is China and the Muslim or whatever has to come together in new ways.

Wars that are now seen by moderate Muslims as virtually and ultimately as a war against Muslims and Islam across the ethic board. 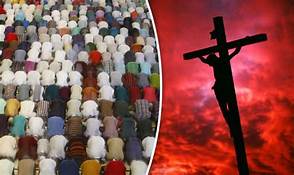 What does the word Islam actually mean?

And if we want a world worth living on, surrender is what we will all have to do in the end.

Arabic: salam alaikum meaning-peace be upon you.

So take the knee, not to race, not to religion, but to the planet.

All human comments appreciated. All like clicks and abuse chucks in the bin.

but despite the bad press, Islam gets its a religion with enormous wells of compassion that is not promoted in the west.