Capitalism vs. the Climate., Cop26., Earth, Global warming, Inequility, The Future of Mankind

While we watched a postponed Olympics game unfold in Japan with barely one in 10 Japanese wanting it to happen, a pandemic is exposing gaps with graphic honesty in a  world that has long been overdue for systemic reform of its economic, social, and technological structures.

All require a global-to-local response and long-term thinking; all need to be guided by science and need to protect the most vulnerable among us, and all require the political will to make fundamental changes when faced with existential risks.

Beyond the obvious short-term impacts of climate change and Covid (such as loss of life, a profound hit to economic and social activity), both are casting a long shadow into the future.

If we remain passive and ununited to the emerging risks, we may lose a historical opportunity to shape the new normal that we want, rather than the one we would be left with.

At the moment the economic risks dominate perceptions, with a prolonged global recession a top concern.

However, if either Covid-19 or Climate change eclipses sustainability on the public agenda where are we then.

What we will be left with are critical non-economic risks concerning the sustainability of life on earth and all that live on it. 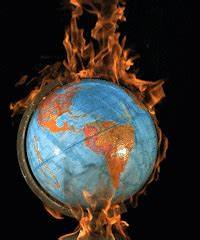 On the environmental front, even with an expected 8% drop in global emissions for this year, the world would still miss the 1.5°C targets to avoid a planetary catastrophe.

If we are to truly recover from the pandemic and its impacts, then it will not be about putting things back together to how they were –we are in the midst of a historic event that will change many aspects of our world.

The long-term societal impacts of both, such as an exacerbation of inequality and changes in consumer behaviors, the nature of work, and the role of technology – both at work and at home – will change our way of life forever, for us as individuals, as a workforce, and as a society.

We were unprepared for Covid that was predictable. We are not preparing for Climate change that will create substantial societal consequences for the long term, now being felt by people worldwide.

There is one thing for certain our attitudes towards traveling, commuting, and consumption will change employment prospects.

So what lessons can we distill, that can feed into your own future scenario, resilience, and business continuity planning?

Profit for profit’s sake will have to be regulated.

No longer can businesses plunder the earth for finite resources to produce worthless short-term material satisfaction. We know that we will have to build back better and address deep systemic vulnerabilities that have been allowed to develop over the last decades.

Therefore, the challenge to return to the ‘new normal’ is as much a psychological as an economic choice.

The timing and speed of the economic recovery, dependent as it is on solving the health crisis, is likely to exacerbate inequality, mental health problems, and lack of societal cohesion. It is also likely to widen the wealth gap between young and old and pose significant educational and employment challenges that risk a second lost generation.

A golden rule of politics is that the timing of a decision is almost as important as the decision itself.

“Timing is everything”, but it is also the element that is hardest to get right.

Of course, we need to focused on the climate, sustainability, and on societal risks, such as inequality, mental health, the lack of social cohesion and inclusion. If we do not do this, then the gaps in inequality – especially financial – are likely to remain and increase destroying all efforts of a green economy, a sustainable economy, or any other form of the economy whether it is socially driven or ever man for himself.

We are already seeing record levels of unemployment due to lockdown measures, to control transmission and are re-learned hard lessons, particularly that social deprivation determines health outcomes.

So it is time for preparation, for a world of shocks which is likely urging to ramp up economic activity, regardless of impact, to recover at any cost.

Much depends on what governments, societies, and businesses will do next. This should be a long-term change in attitude in the historic public vs private debate.

I urge you to take the time to weigh the potential risks and benefits based on your situation before making a decision you could regret for the rest of your life.

We must draw on all our strengths to build back a better world.

It’s time for all avenues of communication to be taking the lead.

The New Normal is knocking at the door and the door is already open.

Change is simple and it’s not easy.

Step 1: Do you want to change?

Step 2: Do you know how to change?

Step 3: Are you willing to give a change time?

Anyone who has ever changed has gone through the process. We need all three steps, and if we miss one, we get none.

The new normal in the end will look like we want it to look.

The life you thought was boring, is the life you’re hoping to get back to right now.”

Ultimately, public health is a political choice. A choice we are now confronted with, and one we will have to make over and over again as we transition to a more resilient, zero-carbon, just, and healthier future.

Hopefully, hold on to that sense of shared humanity.