Capitalism, Capitalism and Greed, Capitalism vs. the Climate., Climate change, Distribution of wealth, Global warming, The Future of Mankind, Visions of the future.

WE SHOULD BE ALL FAMILIAR WITH THE ABOVE QUOTATION.

It is a “Native American saying”.

“Canada, the most affluent of countries, operates on a depletion economy which leaves destruction in its wake. Your people are driven by a terrible sense of deficiency. When the last tree is cut, the last fish is caught, and the last river is polluted; when to breathe the air is sickening, you will realize, too late, that wealth is not in bank accounts and that you can’t eat money.”

When one stands back from one’s self the above sums up the present state of our world. 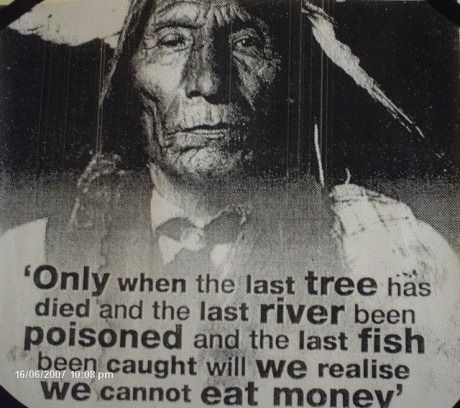 Present needs and present gains was the rule of action—which seems to be a sort of transmitted quality which we in our now enlightened time have not wholly outgrown, for even now a few men can be found who seem willing to destroy the last tree, the last fish and the last game bird and animal, and leave nothing for posterity, if thereby some money can be made.

We are unable to change as we have turned everything into commodities to make material profit or power.

Because most are suffocating in a sea of debt, unable to extricate themselves from the shackles of an abhorrent situation inherently created by the consumptionism and consumerism that grips much of the world’s population.

We are, in effect, products of our own society, now being exploited by AI for profit.

The richer we are and the more we consume, the more self-centered and careless of the lives of others we appear to become.

Our erroneous belief that we are more concerned about manmade climate change than the people of other nations informs the sentiment, often voiced by the press and politicians, that there’s no point in acting if the rest of the world won’t play its part.

Only when the crisis causes or exacerbates an acute disaster – such as the floods – is there a flicker of anxiety, but that quickly dies away.

Sustaining interest in this great but slow-burning crisis of climate change is a challenge no one seems to have mastered.

For years we’ve been told that people cannot afford to care about the natural world until they become rich; that only economic growth can save the biosphere, that civilisation marches towards enlightenment about our impacts on the living planet.

The results suggest the opposite.

The more we consume, the less we feel. And maybe that doesn’t just apply to guilt.

Perhaps that’s the point of our otherwise-pointless hyperconsumption: it smothers feeling. It might also be the effect of the constant bombardment of advertising and marketing. They seek to replace our attachments to people and place with attachments to objects: attachments which the next round of advertising then breaks in the hope of attaching us to a different set of objects.

Even if you somehow put aside the direct, physical impacts of rising consumption, it’s hard to understand how anyone could imagine that economic growth is a formula for protecting the planet.

So what we seem to see here is the turning of a vicious circle.

The more harm we do, the less concerned about it we become. And the more hyperconsumerism destroys relationships, communities and the physical fabric of the Earth, the more we try to fill the void in our lives by buying more stuff.

This is an almost inevitable result of a society that has become restructured around shopping, fashion, celebrity and an obsession with money.

How we break the circle and wake people out of this dream world is the question that all those who love the living planet should address.

There is only one easy answers.

We must make Greed in all its forms of profit for profit sake pay. ( See previous Posts – A world Aid commission )

Agreement’s like the Paris Climate Change promises are not worth the paper there are written on without the necessary finance to create a change of mind.