A shift of a single degree is barely perceptible to human skin, but it’s not human skin we’re talking about. It’s the planet, and an average increase of one degree across its entire surface means huge changes in climatic extremes.

Even if greenhouse emissions stopped overnight the concentrations already in the atmosphere would still mean a global rise of between 0.5 and 1C.

Air temperatures on Earth have been rising since the Industrial Revolution with the average global temperature on Earth having increased by at least 1.1° Celsius (1.9° Fahrenheit) since 1880. Keeping records began in 1880.

A one-degree global change is significant because it takes a vast amount of heat to warm all of the oceans. In the past, a one- to two-degree drop was all it took to plunge the Earth into the Little Ice Age.

The year 2021 had an above-average global tropical cyclone activity with a total of 94 named storms. Snow cover was 9.39 million square miles and the seventh-smallest annual snow cover extent in the 1967-2021 record, with the average temperature across global surfaces 1.51°F (0.84°C) above the 20th-century average.

2021, the sixth warmest year on record. Nine of the ten hottest years or records have occurred in the past decade.

The upper-ocean heat content, which addresses the amount of heat stored in the 0-2000 meters depth of the ocean, was a record high in 2021.

Asia had its seventh warmest year on record.

Oceania had an above-average temperature. 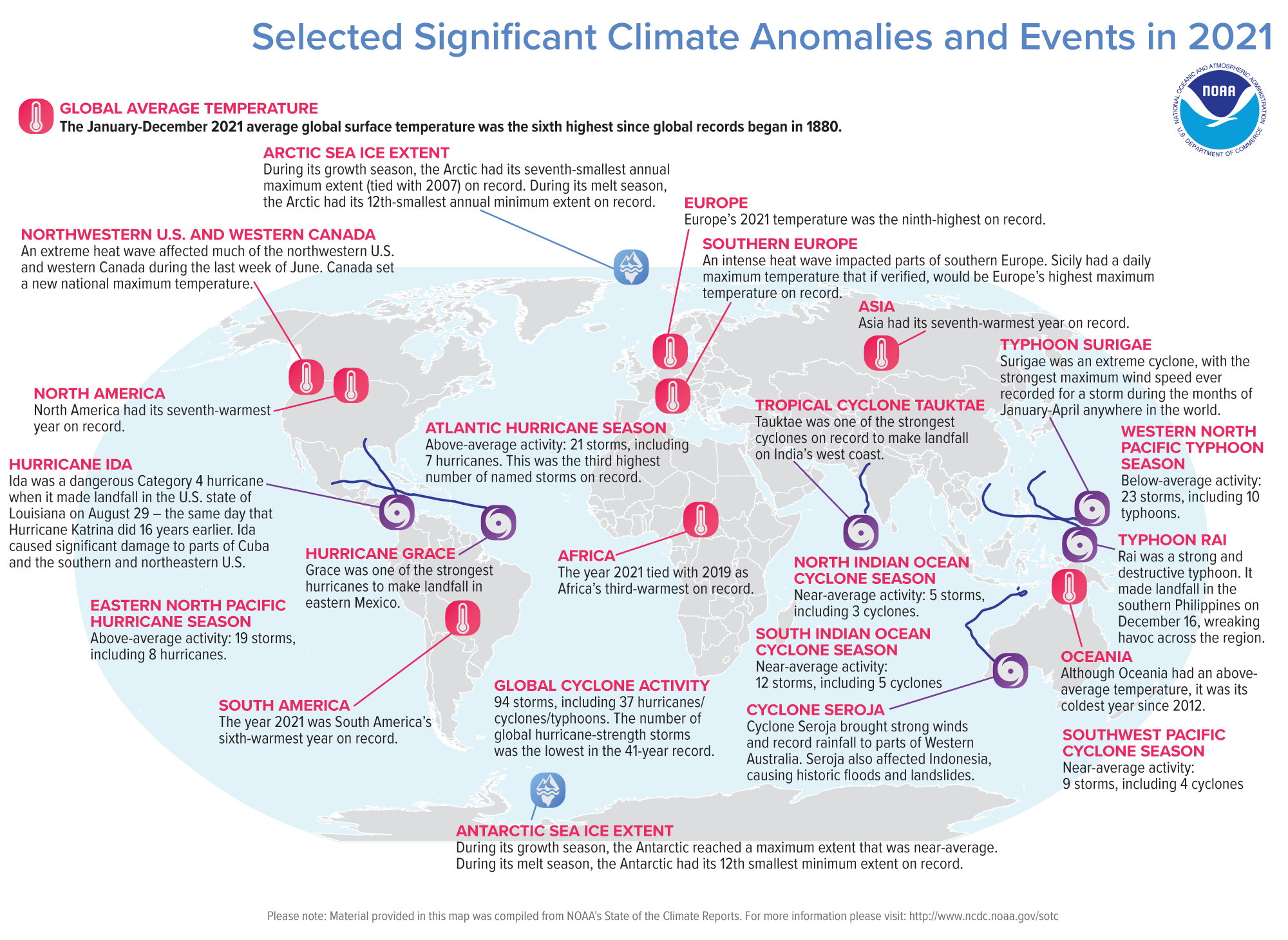 It is irrefutable that we are now looking down the barrel of a Climate Gun.

Mountains are starting to come apart. Polar ice is melting. Greenland will tip into irreversible melt once global temperatures rise past a mere 1.2C.

At the current rate, the whole Greenland ice sheet would vanish within 140 years.

Miami would disappear, as would most of Manhattan. Central London would be flooded. Bangkok, Bombay, and Shanghai would lose most of their area. In all, half of humanity would have to move to higher ground.

Everywhere, ecosystems will unravel. By the time global temperatures reach two degrees of warming in 2050, more than a third of all living species will face extinction.

Beyond two degrees, however, preventing mass starvation will be as easy as halting the cycles of the moon. First millions, then billions, of people will face an increasingly tough battle to survive. In the two-degree hotter world, nobody will think of taking Mediterranean holidays.

In this kind of heat, the death of the Amazon is as inevitable as the melting of Greenland.

Once the veneer of civilization had been torn away a three-degree increase in global temperature the end of the world is nigh.

BETWEEN THREE AND FOUR DEGREES OF WARMING

It would throw the carbon cycle into reverse. Instead of absorbing carbon dioxide, vegetation and soils start to release it. So much carbon pours into the atmosphere that it pumps up atmospheric concentrations by 250 parts per million by 2100.

The stream of refugees will now include those fleeing from coasts to safer interiors. Both poles are certain to melt, causing an eventual rise of 50 meters. Ice sheets have vanished.

We are looking now at an entirely different planet.

At the same time, as the ozone layer came under assault, we would feel the sun’s rays burning into our skin, and the first cell mutations would be triggering outbreaks of cancer among anyone who survived.

It is not too difficult to imagine the ultimate nightmare, with oceanic methane eruptions near large population centers wiping out billions of people – perhaps in days. All the remaining forests burning, and the corpses of people, livestock, and wildlife piling up in every continent, the six-degree world would be a harsh penalty indeed for the mundane crime of burning fossil energy.

The maximum temperatures a human body can stand without dying or suffering severe consequences is 100 F (38 C) but surviving requires continuous fluid intake.

As we look forward to 2022, it’s clear that ambitious net-zero targets pose a myriad of difficulties. As it stands, emissions across the world are not declining.

We can’t afford to wait and hope that the world will stop using fossil fuels in time, it won’t. Because the fragility of our food systems and their dependency on fossil fuels is intrinsically linked with an increasing loss of biodiversity.

We need more than a polluter pays principle so that people who cause damage are financially responsible for their actions.

The reality is that no one wants to suffer the financial costs that affect the changes required to make a difference.

Here below is a suggestion to address this problem.

1 thought on “THE BEADY EYE SAYS. TEMPERATURES ARE RISING AND VERY FEW OF US SEEM TO RELISE WHAT IT MEANS.”