Here we are once more on the brink of another war with Ukraine as the host venue.

After World War II, the western part of Ukraine merged into the Ukrainian Soviet Socialist Republic, and the whole country became a part of the Soviet Union with it gaining its independence in 1991, following the dissolution of the Soviet Union.

Since then Hostilities have simmered for years. 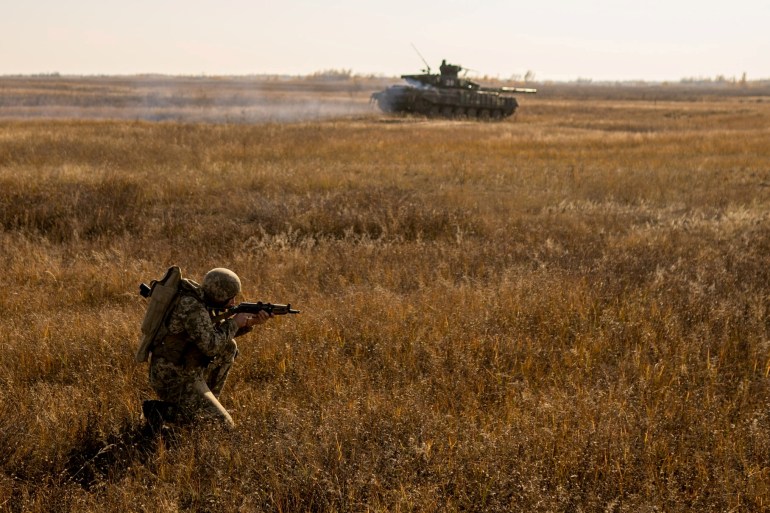 So, what is at the heart of the conflict that has been going on for more than seven years?

Ukraine went through two revolutions in 2005 and 2014, both times rejecting Russia’s supremacy and seeking a path to join the European Union and NATO.

Amid growing concerns, we now have Russia poised to invade Ukraine, with conflicting news reporting as to what is happening and who is to blame.

As we live in such a fucked up world it’s a wonder that any of us exist so you could not be blamed if you are at a loss.

Is it Nato or Russia?

In Putin’s reality, Russia is encircled and under threat and is required to defend itself from Nato. As Putin sees it, only the threat of war can reopen a conversation that, to many in the West, has long felt like settled history: the expansion of nato eastward, the denial of a Russian veto on questions of regional security, and the underlying sense that Russia lost the Cold War.

So Ukraine presents an opportunity for Russia, once and for all, to reassert its geopolitical relevance. If Ukraine joins nato or is drawn into a de-facto military alliance with it, then Putin’s project has failed; if Ukraine is kept from doing so, Putin has fulfilled his historical role.

The reality is whatever the ultimate composition of Russia’s forces, their ability to overwhelm the Ukrainian military is not in doubt. Once such a sizable military force is in place, it is enviable that it comes to exert its own influence on events.

Russia is now calling on Nato states to formally retract a 2008 pledge that the alliance would one day admit Ukraine and Georgia, promise not to deploy certain weapons systems to states near Russia, and refrain from military drills and maneuvers near Russia’s borders.

Even if the U.S. and other Nato members were ready to negotiate on these strategic questions, there is no realistic scenario in which significant progress, much less a formal agreement, could be made in the compressed timeline that Russia seems to be demanding.

This means that, in the end, the West will cave so as to stave off a war it doesn’t want.

After all, a Russian-Ukrainian war is a lose-lose for Western states: either they look feckless if they do nothing and Ukraine is defeated, or they feel compelled to intervene, risking a wider war with Russia that no one has the stomach for.

All of this is raising concerns that Europe may again be beset by war.

NATO was established 66 years ago today, on April 4, 1949, since then it has reinvented itself becoming a military pact against Russia undertaking to arm all the nations around Russia.

Sixty-six years later NATO still exists, as many have argued, for no good reason to counteract threats that are either imagined or which only exist because NATO itself exists. Or worse, to lend legitimacy to the geopolitical whims of its only beneficiary.

There is no treaty obligation to defend Ukraine, which is not a NATO member, so some of the toughest decisions could fall on the European Union.

While the UN these days rarely serves anyone well, NATO serves U.S. interests.

If Putin is seeking to restore dialogue with the West, especially the US, the amassing an army next to Ukraine has worked already.

It’s time for a face-to-face between Putin and Biden.

Since 2018, the U.S. has sold hundreds of anti-tank Javelin missiles to Ukraine. Last March, the Pentagon announced a hundred-and-twenty-five-million-dollar military-aid package, which included armored patrol boats.

In November, Ukraine signed a treaty with the United Kingdom that would allow it to buy British warships and missiles.

Given all that weaponry, what would keep Nato armies from establishing bases?

The issue is not so much Ukraine but the underlying principle:

If a military alliance seeks to expand, it has to consider the interests of those who are opposed.

Russia, in other words, can’t be expected to remain a passive observer of actions that it believes violate its core security concerns.