Capitalism vs. the Climate., Climate change, Distribution of wealth, Extinction, Inequility, Technology, The Future of Mankind

With or without technology there will always be inequalities in the world.

So why do we keep trying to solve poverty with technology?

Because this way of thinking is so ingrained that is adopted by organizations that fight poverty—which often refashion themselves to resemble technology startups.

Inequality has been growing so much that all governments and civil society speak about it with increasing worry, trying to understand its causes, but unable to find solutions, because of greed.

It is our policy on technology that drives inequality.

There is no better example of this than in the way the world is handling the current Covid pandemic unable to share the know-how to make the vaccinations.

Patents and copyrights are not guaranteed as individual rights, like the right to free speech or religion.

After all, why would a drug company pay large amounts of money to people to develop new drugs if the drugs can be copied and sold by competitors from the day they enter the market?

If it is not already obvious, patent and copyright monopolies are instruments of public policy, not acts of God.

This is why there is still not enough coronavirus vaccine to meet worldwide demand.

A year ago there was no commercial market for mRNA products.

Vaccine manufacturers long ago should have been sharing technology and expertise to boost production in the U.S. and Europe, and especially in developing countries.

The same would be true of software developers, makers of medical equipment, computer manufacturers, smartphone companies, and any other product where the cost of research and development was a substantial portion of the price of the product.

The complete elimination of patents and copyrights is of course an extreme scenario, but it is a possible policy option.

If we did choose this policy option, we would have a much more equal distribution of income, in spite of having the same technology.

In short, the fact that there was a huge increase in inequality associated with the development of technology over the last four decades was the result of policy choices, not technology.

There should be serious public debate about both how strong we want to patent and copyright protection to be and also whether they are always the best way to promote innovation and creative work, as opposed to alternatives like direct public funding.

If we acknowledge the extreme case, where we literally have no patent or copyright protection, then we have to recognize that there is nothing inherent in our technology that would cause inequality.

Few things, in principle, can’t be delivered through technology.

It is entirely our rules on technology that can cause inequality to increase.

So on one hand, technology can eradicate poverty — not by making poor people less poor, but by making it less valuable to be rich.

On the other as technology spreads, making its creators rich, but treating its users the same, we should expect more monopolies and more financial inequality.

Although it is your data you can’t pay for a better Facebook experience.

Companies are incentivized to offer a product if it makes more than it costs. And technology ends up not costing much once you’ve built it.

So, in the end, you charge people whatever they can pay and in poorer countries, people just pay and get paid less.

Times are changing from the days that growth in inequality was largely an organic process independent of government policy.

“Owning” the robot/algorithm is not a technical relationship, it is a legal one, and therefore one that depends on our laws.

The reason some people might get very rich from owning robots or algorithms is that they own patents and copyrights that are needed for the making of the robots/ algorithms.

In the past, technological improvements would be beneficial to all:

Extreme economic inequality is corrosive to our societies.

Around 8% of the world’s population lives in extreme poverty — but do you know why?

Gender inequality, caste systems, marginalization based on race or tribal affiliations are all economic and social inequalities that mean the same thing:

You might think that poverty causes hunger (and you would be right!), but hunger is also a cause — and maintainer — of poverty. This is why now with climate change, negotiating international trade agreements behind closed doors with only bureaucrats and corporate lobbyists present has to end.

Economics should take into account ethics and the environment, and treat its claims less like invariable truths.

It goes without saying that any actions coming out of Cop 26 climate change conferences to reduce temperatures will be derailed by not just income inequality, (only the higher income household will be able to afford green energy technologies. Solar panels, electric cars, heating pumps, etc.) but by the total lack of shared responsibility to do anything about it.

Of course, there are hundreds of other elements that contribute to the problems our world is now facing.

Climate change will drive up to 132 million more people into extreme poverty by 2030.

The pricing carbon emissions on average is at a mere $3 a tonne.

The price of inequality in all its forms is greed. There are vast fortunes to be made with Technology/ Algorithms for profit and nothing blurs ethical lines faster than greed.

So far, any decoupling has either been largely relative – in the sense of merely achieving higher rates of economic growth than gains in emissions – or achieved by shifting dirty production from one national territory to another.

And that is why, for now, global emissions are still rising. 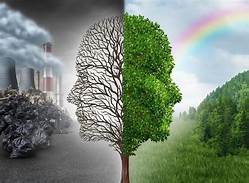 The idea of “Just Transition” without financing is pie in the sky.

Take the aftermath of the Afghan 20-year war.

The country is now facing starvation. Why not bomb it with food.

By coming together to tackle the plague of destitution around the world, we have the opportunity to advance the human condition and eliminate global poverty in a way no one has done before.