Shortly in Scotland on the 31st of October, we are going to be treated to twelve days or longer of verbal by Politicians, Prime Ministers, Presidents, Climate Activists, Royalty,  Greta Thunberg, and David Attenborough, to keep global temperatures from rising.

We all know that humans are capable of astounding feats, including some that seem to defy everything we know about the body. The body can survive for 8 to 21 days without food and water and up to two months if there’s access to an adequate water intake but your brain can only survive for five to 10 minutes without oxygen.

Most humans will suffer hyperthermia after 10 minutes in extremely humid, 140-degree-Fahrenheit (60-degrees-Celsius) heat.

Heat kills more people on an annual basis than any other weather-related factor.

So the link between one’s body and mind is a crucial part of everyday life.

The human brain has a memory capacity that is the equivalent of more than four terabytes on a hard drive.

So why not impress a lasting memory of the Conference that they can take home.

The conference is to be held in the Scottish Events Center so why not make it an event by preheating the center to a wet-bulb temperature of 35 degrees Celsius.

Few locations have hit a wet-bulb temperature of 95 F in recorded history, according to the Science Advances study.

There are places that are already starting to experience these conditions for an hour or two. Unfortunately, with global warming, that’s only going to become more frequent.

Since the late 1980s and 1990s, hotspots have been the Indus River Valley of central and northern Pakistan and the southern shore of the Persian Gulf.

Locations that are at risk of these temperatures in the next 30 to 50 years include northwest Mexico, northern India, Southeast Asia, and West Africa.

Hundreds of millions of people live in a tropical climate near the equator in South/Central America, Africa, and Asia. This includes huge countries like Brazil, India, Malaysia, and Indonesia.

All of these people are in imminent danger from climate change.

In any IPCC scenario between +2° and +4° of global warming, areas near the equator will experience such conditions on most days of the year and up to a point where not only physical activity but being outdoors, in general, becomes lethal!

These countries will become basically inhabitable.

What does this mean for possible future scenarios?

SO PERHAPS (BEFORE  BILLION OF WORDS)  A TWO MINUTES OF EXPERIENCING 70 CELSIUS MIGHT concentrate their mind to ACHIEVE ACTION ON CLIMATE CHANGE.

Now of course we don’t want to fry them all, and the cost of heating the Scottish Events Center (not to mention the carbon footprint) would be in total contradiction to what we want to see. 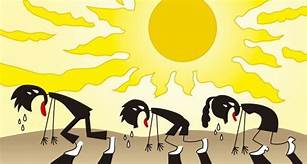 However, a small jacuzzi or heated glasshouse at the entrance would do the trick.

( If the wet-bulb temperature rises above the human body temperature, you can still sweat, but you’re not going to be able to cool your body to the temperature that it needs to operate at physiologically.)