Capitalism vs. the Climate., Distribution of wealth, The Future of Mankind

Most of the world’s governments agree by now that global warming poses a serious threat to the future well-being of all people and they agree that it is desirable to reduce the concentration of CO2 in the atmosphere by lowering our emissions of CO2.

But it would appear that we have given up with the emphases how moving to Adaptation. Another words prepare for the consequences rather then trying to prevent them. The problem isn’t how to convert the world but it remains and will remain just who will pay for the conversion to keep global temperature rise below 2C.

( About 20 billion tonnes of CO2 would need to be removed from the atmosphere every year by 2100.) 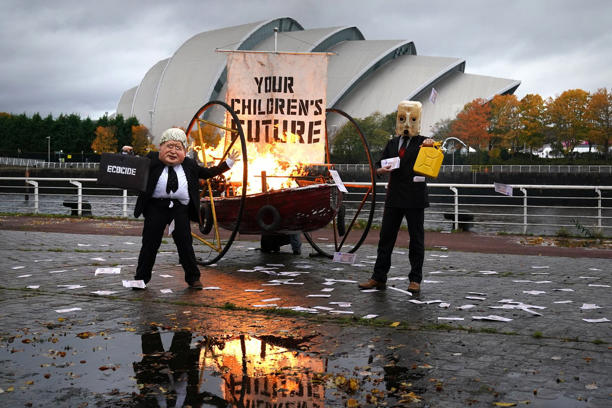 Most of the world ( at least 84% now have some sort of adaptation plan but there is plenty of variation across these plans.

The Disparity between the money needed to meet an adaptation targets and the money actually available is laudable as the funds needed will not keep up as the impact of climate intensify and most of this kind of finance is in the form of loans trapping poorer countries in long cycles of debt.

A simple “carbon tax” approach does not guarantee any particular total emissions amount and if a country wanted to use such a tax to meet specific goals, the tax would have to be adjusted frequently, which businesses would have a hard time dealing with (they like predictability in things like taxes).

Electrical cars won’t do it because it take 80,000 miles for the carbon of a new EV to balance out with a new gasoline car.

Planting billion of trees won’t do it in time.

Climate change is not an American, a Chinese, an Oil industry, problem it is a species thriving problem.

What’s is needed out of the forthcoming COP Summit in Egypt is to stop tearing each other apart and instead fund adaptation to the changes we are now all facing.

We could regulate our way to zero carbon emissions, but this will not solve the problem because once China comes out of Covid lockdown its admission will dwarf any regulations.

So why not ask Sport the biggest industry (with its associated to the gambling Industry  and media Sponsorship) to give a helping hand.

Sport is not just about participation. It is also part of the commercial world, managed and marketed to make money. Sponsorship and the media are now significant influences on sport.

So what could sport do?

One only has to look at the carbon emissions generated by the forthcoming World Football Cup.

The World Cup is very important and it is bound to have a carbon footprint.

There will be a direct human cost to this tournament. This is a huge amount of emissions for one sporting event.

FIFA says the Qatar World Cup will have a footprint of 3.6 million tonnes of equivalent carbon waste it will be ten times this.

The offset scheme the World Cup has chosen doesn’t remove carbon from the atmosphere, so it’s a bogus term. It’s very misleading to call this a carbon neutral World Cup. They’re not even removing carbon to compensate.””

FIFA’s claim this is the greenest World Cup ever doesn’t make any sense.

The Tokyo Olympics also made a bold offset claim before the Games.

After confirming that Tokyo 2020 was carbon-negative.

(According to the report, the Games generated around 1.96 million tonnes of CO2e. This figure would have been around 2.76 million tonnes if domestic spectators were able to attend thanks to Covid. ) It’s an impressive feat, given that the event’s estimated carbon footprint—2.3 million metric tons of CO2—is equal to the annual emissions from about half a million cars. The highlighted of the Games was the fact that the athletes’ medals in Tokyo were made from metals extracted from recycled electronic and electrical devices.

Even setting aside the carbon footprint question, the Tokyo Games are representative of an overall declining level of sustainability in the Olympics over time. The International Olympic Committee (IOC) has mandated that all Olympic Games from 2030 will need to be certified as carbon-neutral or carbon-negative.

This can only be achieve by stopping the Olympic circus and ask the world to build a permanent Olympic stadium in Greece where the games originated.

The circus of Formal One could also do the same by  build a permanent racing track.

Of course the chances of this happing is zero.

We now have over two hundred countries attending the Cop27 conference which marks the 30th anniversary of the adoption of the United Nations Framework Convention on Climate Change A  Reason for hope or doomed to disappoint?

As we once more witness countries across the world fail to meet climate commitments to keep global temperatures below a fateful 2 degrees Celsius, can this year’s COP27 in Egypt rise above the failures of the past — or is it destined to disappoint?

It’s a matter of defining what criteria will be used to measure the progress. Only 79.6 billion dollars’ worth of climate finance have been provided, far less than the 340 billion per year needed for adaptation by 2030, according to the UN.

With out a world Aid Fund COP conferences have served very little or no purpose at all other then helping prepare the ground for future conferences.

We all know that Climate change leads to population displacement, tensions over natural resources and challenges powerful interests,”

SPORT COULD AGREED TO PLACING A 0.005% COMMISSION, ON ALL GAMBLING, ON ALL PRIZE MONEY, ON ALL SPONSORSHIPS ON ALL MEDIIA  AND SPONCERSHIPS DEALS, ON ALL TRANSFER FEES, ON ALL TICKETS TO WORLD EVENTS.

Without a world perpetual aid fund  the alternative is war and power struggles at the international level.

Cop27 is now all about money: ( See previous post. How to create a perpetual World Aid Fund – fair and transparent)