If we are not vigilant we might by accident and neglect combined with the erosion of civil liberties and with the increasing disenchantment of politicians easily sleepwalk into a form of a totalitarian society.

You could say at present that the world has more pressing problems but I consider this as a very dangerous trend and, sadly, unlike climate change perhaps unstoppable. 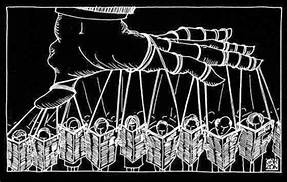 Because corporations belong to no land, no country, no people and have no loyalty to anything apart from profit – their profits and the profits today are on an unimaginable scale.

Because individual liberty which our ancestors fought for generations to establish are now been blowing away in the wind with Artifical Intelligence turning our politics into a form of Digital Dictatorship.

Control of society above personality.

The modern sense of entertainment, for example, has led to the shallowness

of life that permeates all aspects of life, separates us from the seriousness of

What we are seeing is a widening of inequality, a rise in racism and ant semitic traits all of which are essential to a totalitarian society. Individualism itself is diminishing and in the end, people will embrace the totalitarian state’s ideology.

This fourth industrial revolution as it is called is presently without any AI laws other than the EU guidelines on the trustworthiness of AI – what data to use or not use to train other Algorithms.

The last industrial revolution taught us a lot about basic human rights and social values to wake us up, to help us prepare for the future however what we are seeing with smartphones is a form of doublethinking that leads to banality or to implicit acceptance of the standard of psychological normality, the lost of limits.

You are going to work with a digital colleague that has no set rules, no personal judgment.

The threat of climate change with the rise of stateless refugees is forcing millions around the world to realistically confront a future in which their lives, at a minimum, look radically worse than they are today.

At the same time, emerging algorithms are giving a small technocratic elite the power to radically alter our species to a point when it will no longer resemble itself.

They both will call into question the basic ideas of who are and how we think about ourselves.

There are technologies now already emerging that are asking this question with the very fundamental assumptions about what it means to be human.

Because by limiting the choices and activities that have given us our basic sense of identity we can’t express our own opinions because they fear individual power.

There is nothing we can really do to change the course of our civilization except to patiently and persistently saying the truth about false worldviews, both on climate change and materialistic algorithms for profit both of which are and will have dramatic consequences.

It seems that fossil fuel owners and technology only goals are to protect their business models at all cost.

Climate change will shrink the size of the world that is livable on. while allowing unregulated technologies to rule it.

Algorithms Data Apps are tools by means of which, once installed, they start making decisions on your behalf. They will enable governments to assert their ideological and intellectual authority over party members and employees of party-run institutions, including schools and media.

The beauty of digital media technology — disquieting for those who care about privacy and freedom from intrusion — is that our smart apps know a great deal about our actual behaviour.

Technology now interacts with you and takes the measure of you. It can determine just how “smart” you are when it comes to your devotion and your grasp of the ideological essentials.

This is where we seem to be headed for compelling materialist reasons, not ethical reasons.

Habitual smartphone user was spending a great deal of time glued to the screen, as a result, the potential of the smartphone to be used as a tool through which authoritarian regimes can shape and reinforce dominance over the population is no longer a fantasy – China.

It is reinventing the process of ideological dominance for the digital era.

China is building a digital dictatorship to exert control over its 1.4 billion citizens. For some, “social credit” will bring privileges — for others, punishment.

If successful, it will be the world’s first digital dictatorship.

The flawless totalitarian state, powered by digital technology, where the individual has nowhere to flee from the all-seeing eye of the Communist state. who has done what (and for how long)

They can leverage digital media products to reshape the whole process of ideological control in ways that are far more personal, and far more effective, than anything we have witnessed in the reform era.

We, on the other hand, need to find out once again how to make decisions not just as individuals but as a society.  We need new economics theories of not top-down but bottom-up. Its isn’t capital that creates economic growth its people. It isn’t competition that creates prosperity its cooperation. The economics that is not inclusive will not allow modern society to thrive.

Its painfully obvious that the fundamental assumptions of neoliberal economics are wrong.

The market now with profit-seeking algorithms can never distribute wealth because there is no equilibrium.

So is there any way of combating the technological growing algorithm market.

Inclusion will be the only brake.

We must allow people to get involved while improving all stakeholders in the market. The laws of economics are a choice.

So give people the choice to invest in the future by the creation of Nation backed non-trading Green deal bonds. ( See previous posts) This is about creating a platform for real and measurable engagement.

Taking self-responsibility and living life the fullest will not only enrich our own lives but as well the lives of others.

Then the question arises:

No government in what used to be called “the free world” seems prepared to take the steps that can stop this inexorable decline.

Totalitarianism is a political concept of a mode of government that prohibits opposition parties, restricts individual opposition to the state and its claims, and exercises an extremely high degree of control over public and private life.

Big data:  The length of time that it took them to use unfettered free speech to subvert and undermine all of our core institutions. Thus we arrive at the present situation where the brief a historical version of freedom of speech has reverted back towards what the state deems controversial today might be very different to what it deems controversial tomorrow.

Take Brexit for example. Nostalgia is that it’s become a political weapon. Politicians are creating nostalgia for an England that never existed and selling it, really, as something we could return to.

Do we want to be told what to think and do? Or are we ready to come up with our own solutions for the consequences we’ve caused?

The idea of the totalitarian state can never be a true and effective form of government rule. Increasing state interference, a crumbing electoral system, the loss of a free press and loss of freedom of speech are grave threats to our democratic system.

The potential consequences that come from using AI, such as giving up privacy are only the ice cubes in the bucket.