What is the Northern Ireland protocol? 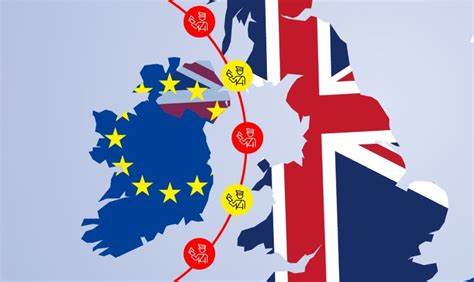 The protocol was part of the UK’s 2019 Brexit divorce deal with the European Union.

Unionists say this undermines Northern Ireland’s position in the UK and could lead to an economic united Ireland.

The British government would like to unilaterally change or even dump the protocol – this would please Brexiters and Unionists.

But this would more than likely trigger a trade war with the EU. Which is the last thing Britain needs at the moment.

The Stormont executive as a result of the last election and the refusal of the Unionist to accept the Protocol has become a zombified administration in which civil servants and ministers from the outgoing executive continue basic functions but cannot take big decisions or launch new initiatives.

Of course if the protocol is weakened or changed, the Unionist will demand a new election in hope that the DUP would overtake Sinn Féin as the biggest party, giving it the right to nominate a first minister.

Another words it must work for the whole community in Northern Ireland not just the Unionist  And no matter what happens, whether it is maintained in the future will always be for the people of Northern Ireland to decide.

THE PROTOCOL IS LITTERED WITH NEW PROCEDURES AND OF COURSE IS UNABLE TO ADDRESS WHAT IT MIGHT CREATE IN THE FUTURE.

WHILE WE ALL BUSSY WITH THE COST OF LIVING ETC,  WHAT REALLY IS HAPPING?

The British government has published new legislation which would override key elements of the Northern Ireland Protocol, an international treaty they negotiated and signed to deal with the fallout of Brexit. The British government says the legislation is necessary and lawful and consistent with obligations in international law, however, this is likely to be challenged in court.

Where will this leave us?

If the British government continues to take this legislation through Parliament and successfully turns it into law, the EU will be forced to act to protect a member state, effectively, Ireland from the consequences of a breach of an international treaty, which has significant consequences for Ireland in terms of our own place in the EU single market.

The British are mixing up the principle of consent and the cross-community majority cited in the agreement as a way to justify their actions in placating the DUP.

As we shuffle from global crises to global crises, Britain under the Conservatives does what it wants, regardless of international law, or humiliation on a global scale.

Breaking international law was “not a big deal.” Just pass a bill and foreign affairs becomes a matter for devolved non sitting ministers.

It is easy to forget history when it didn’t kick down your front door or imprison your father without trial, or worse.

Until some people in the North and in Westminster come to realise that you cannot eat a flag, more of us will die. There is no point to a parliament.  Bring back King Henry the eight, who gave the fingers to both parliament and the bloke called the Pope.

Watch this space. For another reason that the UK cannot be trusted.

All human comments appreciated. All like clicks and abuse cucked in the bin.