Once again the hands of the world to do anything are tied as we watch the fruits of historical events unfold in yet another tragic outbreak of killing in the lands of fundamentalism.

On May 14, 1948, David Ben-Gurion, the head of the Jewish Agency, proclaimed the establishment of the State of Israel. U.S. President Harry S. Truman recognized the new nation on the same day.

In 1921 Northern Ireland was created when Ireland was partitioned by the Government of Ireland Act 1920.  The ratification of the treaty led to a renewed period of civil war and years of hostility and violence between unionists and nationalists known as The Troubles.

Both are now only solvable by Unification.

Like Northern Ireland, Catholics and Protestants, Israelis Jews, and Palestinians can only be united under a single, binational plural nonsectarian society state.

If this were to happen both Israeli Jews and Palestinian Arabs, Catholics, and Unionists would enjoy the same legal and civil rights and live under governments in which all religions and cultures are represented and protected.

Why is this the only route?

Like Northern Ireland Israel has no written constitution, the Basic Laws provide legal statements outlining the rights of the individual.

“This is a defining moment in the history of Zionism and in the history of the State of Israel. One hundred twenty-two years ago after [Theodor], Herzl shared his vision, we have established into law the fundamental tenant [sic] of our existence. “Israel” is the nation-state of the Jewish people. A nation-state that respects the individual rights of all its citizens; and in the Middle East, only Israel respects these rights. This is our state, the state of the Jews. In recent years, some have attempted to cast doubt on this, and so to undercut the foundations of our existence and our rights. Today we etched in the stone of law: This is our state, this is our language, this is our anthem, and this is our flag.”

The law enshrines the Zionist idea upon which the nation was founded, namely that Israel is a country established to fulfill the Jewish people’s “right to national self-determination.”

Therefore when one looks at the recent history of Israel it mirrors South Africa’s years of Apartheid Law.

However, there is something tragically ironic about the Palestinians’ campaign to press for a UN resolution to establish a Palestinian state in the West Bank, Gaza, and East Jerusalem. Because that was what Israel already offered in 2000 and again in 2008 to no avail but because the history of the twentieth century is a history of the Palestinians’ resistance to establishing a Palestinian state—if it had to exist side by side with a Jewish state. By that standard, historic Palestine is simply a misnomer, especially if what is meant is an area with a particular set of borders enduring through time.

Because the troubles of the Holy Land are surrounded by too many walls. 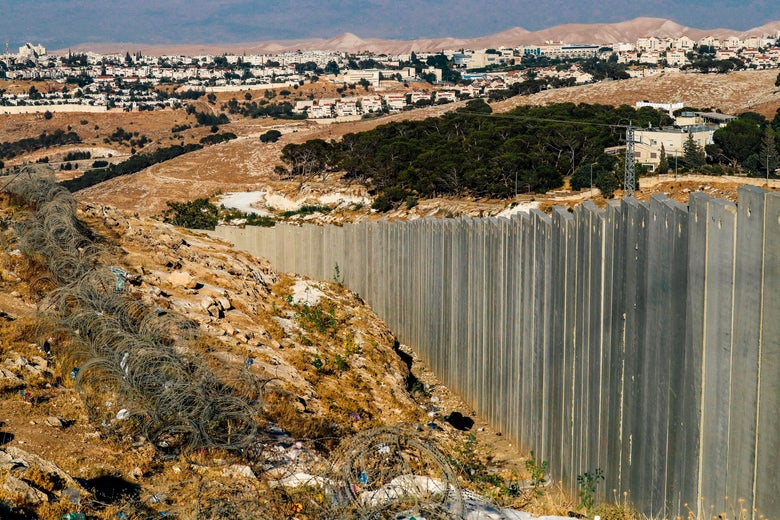 Because we all know that borders and walls are porous and will become more so in the future with Climate change.

Does a country that prides itself on freedom need a fortified border fence?

For all who confront a wall, it remains a daily, brutal reminder of aggression and loss.

Historic Palestine and Northern Ireland as we know it today are derived from a map drawn up by the British at the end of World War I—in particular Israel by British Christians whose understanding of the geography of Palestine was largely based on the Bible, which, as we all know, is derived from the Jews.

A border drawn by British Christians based on their reading of the Jewish Bible is now interpreted by Muslim fundamentalists as God-given and unchangeable!

The two-state solution has a long history dating back at least to 1937 when the British proposed to partition the land between Arabs and Jews while leaving Jerusalem under international control.

Achieving a two-state solution is unrealistic now and will remain so.

There will be no two-state solution.

Where are we now?

Is peace even a possibility for one of the world’s longest-running conflicts or has the time already run out?

For nearly three decades, the so-called two-state solution has dominated discussions of the Israeli-Palestinian conflict. But the idea of two states for two peoples in the territory both occupy was always an illusion, and in recent years, reality has set in.

The two-state solution is dead.

Relinquishing land claims or building settlements in pursuit of peace to any people is especially war-making.

A “two-state solution,” would leave the Palestinians with only limited administrative sovereignty over a noncontiguous territory completely surrounded by Israel. Permitting an annexation that would create a reality of apartheid.

The time has come for all interested parties to instead consider the only alternative with any chance of delivering lasting peace: equal rights for Israelis and Palestinians in a single shared state.

In Israel /Palestinians case reaching an agreement on things like borders, Jerusalem and Palestinian refugees is too complicated for any other solution.

In the Northern Ireland case, the complicated history of discriminatory and repressive English regime teaches us that Ireland had to cope with a revolution and civil war when it was undergoing a fundamental transformation that is still not completed without unification.

With the collapse of the Catholic church power in Southern Ireland, the current border had been only a political border up to England turned it back on the EU.

As a result, Northern Ireland while staying part of Britain reaching an agreement on a border that recognizes that Ireland is in the EU is a fact of life.

In the Israelites case, if one was to draw the border along the ‘67 lines, hundreds of thousands of Israelis who live in West Bank settlements wind up on the Palestinian side. Would those people become citizens of Palestine or (probably forcibly) be made to move back to Israel proper?

Yes, in both cases a one-state solution still comes with logistical problems of its own, not the least of which is who would keep the peace between two peoples who have been at war for more than a half-century.

There is no incentive or stick in the universe that can make Israelis or the Irish agree to double their population and with a culturally foreign, hostile population to boot unless there is recognition that we are basically all the same.

Any other solution requires two separate, independent states, one Israeli and one Palestinian, each with its own government and full autonomy over its domestic and international affairs which is totally unrealistic.

Where would the borders be between these states?

What would happen to Jerusalem, a city important to both peoples?

It is time for a progressive one-state solution. 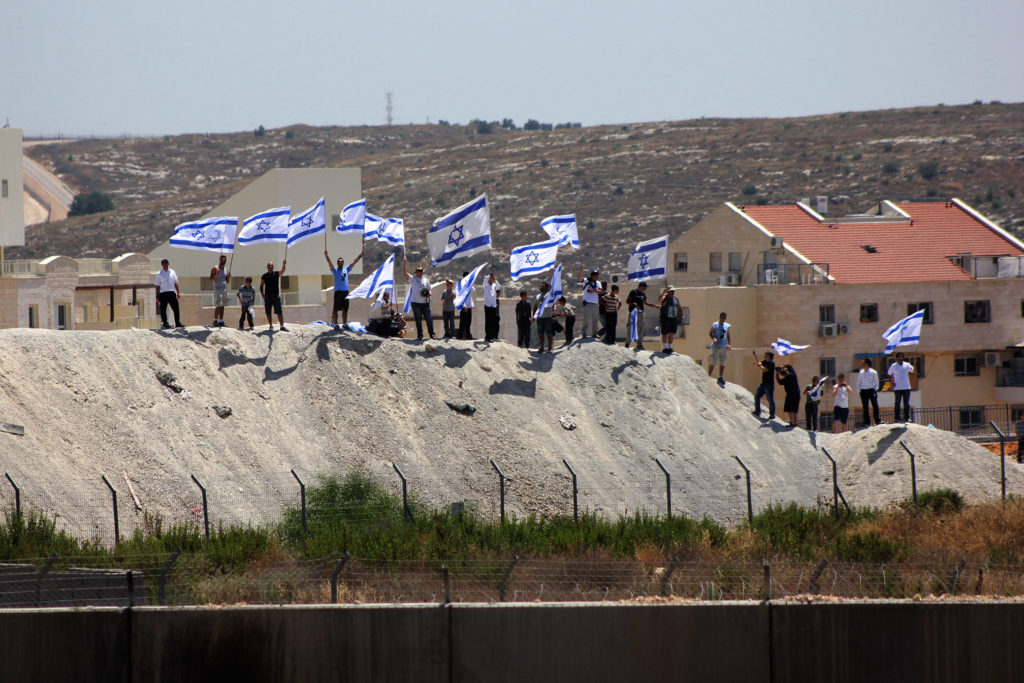 Either it finds ways of integrating its Arab citizens into national life and reversing a growing trend of communal alienation and anger. Or its own Arab citizens could become a powerful part of a more unified Palestinian national movement confronting Israeli rule.

The devil is in the details.

The current outbreak of violence is sowing the seeds for a conflict that is worse than the one we already have. We are far from the verge, or anywhere close, to achieving a conflict-ending agreement.

The issue now is not even one or two states it’s three states, what you have right now is a three-stage approach.

You have Israel with its residual authority in Gaza and the West Bank, you have the Palestinian Authority which is dysfunctional although admirable entity which has done quite a bit in terms of state-building, and then you have Hamas which is consolidating its power and control in Gaza and the longer that separation continues the longer that consolidation and the hardening of those political, economic and physiological lines will be.

Recognition of Israel as the nation of the Jewish people, the so-called fifth element, which has now become a fundamental part of the negotiating process at least on the Israeli and, I suspect, the American side to have put the notion of negotiating two states right now between this Israeli government and this Palestinian Authority virtually unthinkable.

Palestinian citizens of Israel are 20 percent of the population of Israel they have rights that are guaranteed by law but the Israelis discriminate against them socially and economically.

Then we have in one of the most densely populated places in the world 6 million Palestinians ruled by Israel, with no citizenship.

We all know that the Israeli-Palestinian issue is extremely complex and filled with biases and denials, not to mention cherry-picking only certain aspects of history at the expense of others.

Arab dictators of nearby countries don’t care about Palestinians and find it more convenient to just keep the conflict frozen. A huge obstacle to solving the problem is the official policy of Arab states, which all agreed to not grant citizenship or any other regular legal status to people born in them who are descendants of “Palestinians.”

We also know that the Israeli-Palestinian issue won’t go away. Neither will it be solved by oversimplification or dismissing the many arguments-some which are justified from all sides.

Take, for instance, I have never understood by what logic the Palestinians in the West Bank would want to create a one-state, would actually make a case for one-state, or on what legal and political basis would they lay their claim to citizenship in one state.

Last but not least where are the voices on the opposite sides of the younger generation.

Surely those that belong to multiple nations and are not still diasporic with today’s technology have myriad cross-border connections – that impact identity (and politics?)

Yes, they are dealing with an uncertain world, and yet if you consider the past now is the moment to be more optimistic about the future.

Any historian and geographer who has spent time on the ground and around the world know that borders and boundaries are porous at best times.

Jerusalem will have to be the capital of both states, there will have to be security arrangements that meet Israeli security needs and the Palestinian desire for sovereignty and there has to be some resolution of the refugee issue which deals with a variety of aspects, compensation, rehabilitation, absorption, some historic recognition by the Israelis of the refugee problem, some limited return of refugees to Israel proper perhaps, unlimited return to a Palestinian state, but these are general principles, and once you state those there is still a lot of work to be done.

As long as the conflict is ongoing, the Palestinian economy can’t rebuild, so foreign money spent will achieve little more than temporary humanitarian relief till one side fully capitulates to the other due to slaughter.

The only way true citizenship of a country can be achieved after years of wars is the creation of a new state from the rubble.

All comments appreciated. All like clicks and abuse chucked in the bin.