Capitalism vs. the Climate., Climate change, Extinction, Global warming, The Future of Mankind, THE UNITED NATIONS

Ban Kimoon says this is a moment in history, which I agree but signing the Paris Agreement doesn’t mean emissions will go down.

Are we being hoodwinked or Shakespeare by worthless words on paper that don’t come into effect till the year 2020.

By then the great barrier reef in Australia will be a bleached dead sheet.

THE FIFTY FIVE COUNTRIES THAT ARE RESPONSIBLE FOR 55% OF THE WORLDS GREENHOUSE EMISSIONS WILL HAVE BY THEN PUMPED ENOUGH CO2 INTO THE ATMOSPHERE TO NULLIFY ANY REDUCTIONS.

NOT FORGETTING THE AMOUNT OF METAIN THAT THE OCEANS AND THE ARCTIC ARE GOING TO RELEASE.

HERE ARE A FEW HARD FACTS:

No country has shared a detailed, credible strategy to achieve what scientists think is necessary: Ending the era of fossil-fuel emissions and converting entirely to clean energy no later than the middle of this century.

Not one country has said where is the Money coming from. If we want change we have to pay for it and there is only one fair way of doing this. (SEE previous posts)

There are 195 countries in existence. This does not include Kosovo (disclaimer), or  Palestine or Western Sahara or Taiwan or  Greenland or many other partly recognized states .

Whether they make good on their pledges to slow dangerous greenhouse gas emissions will depend in large part on the actions in the years ahead by the world’s largest polluters.

The United States, pledged was thrown into question in February, when the Supreme Court unexpectedly put a hold on implementing a major environmental regulation aimed at curbing greenhouse gas emissions from coal-fired power plants. Now it remains in limbo until all legal challenges have been resolved, which is likely to take at least another year.

China, has pledged to have its emissions of carbon dioxide reach a plateau or decline “around 2030,”

The European Union’s, pledge to cut emissions by at least 40 percent by 2030. Member states still must reach consensus in important areas on climate policies.

Perhaps the most significant pledge by India has been to increase solar power generation to 100 gigawatts by 2022, up from about three gigawatts generated in India last year. “That’s an earthshaking commitment,”

Russia has yet to make any binding pledges to reduce greenhouse gas emissions.

Brazil, President Dilma Rousseff committed to an ambitious plan to reduce her country’s emissions 43 percent from 2005 levels by 2030.

Indonesia, one of the world’s largest greenhouse gas polluters due to mass deforestation, pledged under the Paris Agreement to cut its emissions 29 percent from a business-as-usual scenario by 2030, or by 41 percent if it receives substantial assistance from the developed world.  But even with those pledged reductions, Indonesia’s emissions would still soar, nearly doubling from 2010 levels.

After a quarter-century of failed diplomatic efforts, big uncertainties hang over the climate deal even as the wording oil and gas companies continue to invest billions of dollars a year searching for new reserves of fossil fuels.

The announcement of 175 countries signing the Agreement hide’s the true position and gives the impression that the problem is being tackled.

It is already too late to eliminate the risks entirely.

We are looking at climate effects so severe that they might destabilize governments, produce waves of refugees, precipitate the sixth mass extinction of plants and animals in Earth’s history, and melt the polar ice caps, causing the seas to rise high enough to flood most of the world’s coastal cities.

So speaking up and exercising your rights as a citizen matters as much as anything else you can do.

The signing ceremony on Friday is only an intermediate step. After, countries will still have to present formal ratification documents, and the Paris Agreement will not take effect until 55 countries representing 55 percent of global greenhouse-gas emissions have done so.

All the World’s a stage– and some people are desperately unrehearsed. 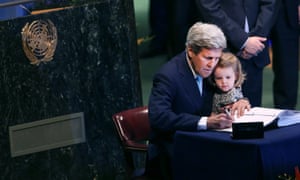