Pakistan's nuclear arsenal., Pakistan., The United States and Pakistan are by now a classic example of a dysfunctional nuclear family

With a global climate now deeply hostile to Islamic militancy, these are dismal times for peace. The whole globe has a stake in this.

Can there ever be peace while one Nuclear War Head exists.

The answer is no.

One War head as I said in the last post gives birth to another.

The Next one in the Club- Let’s look at Pakistan.

It is obsession to maintain military parity with India.

Pakistan doesn’t really have the money or the technological capabilities for a premeditated strike so it is developing a secured second-strike capability. An other words it moves its nukes from one location to another so that there might be one lunatic left to press the button.

Pakistan’s loose nuke problem underscores a global danger that may already be out of control. Even in the best of times, Pakistan’s nuclear-weapons program warrants alarm.

The terrorist attacks on September 11th raised concerns about the security of Pakistan’s nuclear arsenal with the Americans now paranoid that a nuclear weapon could fall into the hands of a Terrorist Group.

Remember that man whose name you could not mentioned on the phone without the resulted click he took refugee in Pakistan.

No body wants to openly discuss the nightmare scenario of terrorists getting hold of nuclear material or weapons.

Most Pakistanis believe the jihadist scenario is something that the West has created as a bogey,” says Hoodbhoy, “an excuse, so they can screw us, defang, and denuclearize us.”

After the defeat of Pakistan by India in the 1971 war Pakistan was pushed further into the nuclear arena by the Indian test of May 1974.  So Pakistan’s motive for pursuing a nuclear weapons program is to counter the threat posed by its principal rival, India, which has superior conventional forces and nuclear weapons.

No one can never be sure whether Pakistan will refrain from using nuclear weapons.

Pakistan now sees nuclear weapons as a talisman. Nukes, after all, are a valuable political tool, ensuring continued economic aid from the United States and Europe.

India and Pakistan have already fought three conventional wars since they gained independence in 1947, including two over Kashmir.

Pakistan’s nuclear weapons program was established in 1972 by Zulfiqar Ali Bhutto,shortly after the loss of East Pakistan in the 1971 war with India.

The US did apply sanctions. However, the U.S. suspended sanctions each time developments in Afghanistan made Pakistan a strategically important “front line state,” such as the 1981 Soviet occupation and in the war on terrorism.

By 2020, it could have sufficient weapons-grade uranium and plutonium to manufacture more than 200 nuclear weapons, roughly equivalent to the size of the United Kingdom’s nuclear arsenal. Pakistan has the fastest-growing nuclear program in the world.

Today, deterrence has fundamentally changed but there is a fundamental link between crises and nuclear weapons in South Asia.

These steps have cleared the way for a more aggressive set of nuclear policies.

The United States and Pakistan are by now a classic example of a dysfunctional nuclear family (with an emphasis on “nuclear”). The White House appears to have made a tacit trade-off with Islamabad: for your cooperation in Afghanistan, we’ll leave you to your own nuclear devices. 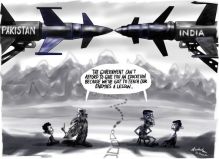 So should we be concerned that other states or terrorist organizations could obtain material or expertise related to nuclear weapons from elements in Pakistan.

It’s the very least you can.  Considering that the Trinity Test ( First ever detonation of a nuclear device) is only one of the five experiments that could have destroyed the world.= Kola Super Deep borehole, Hadron Collider, Starfish Prime, and Seti.

These weapons proved to be useless .especially in this day and age—is perplexing.” It’s extremely dangerous.”