Where did we come from?

If you have opened this post I wont pay you the disrespect of not knowing the Darwin & Human evolution theory but did you know that he saw his first Ape at London Zoo.

So before we go any further there is no point in reading this post with a closed Darwin mind. The evidence is so sparse that people are free to frame a favorite hypothesis about what it was that made humans different.

To have a chance of understanding evolution we must think in much larger units of time and possibilities than those that we use to define our lives.

Our species of humans first began to evolve nearly 200,000 years ago in association with technologies not unlike those of the early Neanderthals.

There is no reliable evidence of modern humans elsewhere in the Old World until 60,000-40,000 years ago, during a short temperate period in the midst of the last ice age.

Some of them migrated out of Africa into the rest of the Old World replacing all of the Neanderthals and other late archaic humans, beginning around 60,000-40,000 years ago or somewhat earlier.

So current data suggest that modern humans evolved from archaic humans primarily in East Africa. Supporters of this model believe that the ultimate common ancestor of all modern people was an early Homo erectus in Africa who lived at least 1.8 million years ago.

So the first modern humans did evolve in Africa, but when they migrated into other regions they did not simply replace existing human populations. Rather, they interbred to a limited degree with late archaic humans resulting in hybrid populations.

If so why to we have 46 Chromosomes while Apes have 48. Where did other two go?

It is further suggested that since then there was sufficient gene flow between Europe, Africa, and Asia to prevent long-term reproductive isolation and the subsequent evolution of distinct regional species.  It is argued that intermittent contact between people of these distant areas would have kept the human line a single species at any one time.  However, regional varieties, or subspecies, of humans are expected to have existed.

It is now clear that early Homo sapiens, or modern humans, did not come after the Neanderthals but were their contemporaries.  However, it is likely that both modern humans and Neanderthals descended from Homo Heidelbergensis or Homo Rhodesiensis.

Evolution Of Man – What is it?

The modern theory concerning the evolution of man proposes that humans and apes derive from an ape like ancestor that lived on earth a few million years ago.

The theory states that man, through a combination of environmental and genetic factors, emerged as species to produce the variety of ethnicities seen today, while modern apes evolved on a separate evolutionary pathway. Nevertheless, a closer examination of the evidence reveals evolution to be increasingly less scientific and more reliant upon beliefs, not proof.

Six million years ago our ancestors began walking on two feet. In that six million years the foot evolved from the flat-footed knuckle walking like that of a chimpanzee, to what it is today, an arched foot perfect for upright, high-speed running.

Scientists now know the missing link for what enabled humans to survive through periods that many other species went extinct, it’s called Persistence Hunting. And the human body perfected the equipment for such high endurance running:

Physical and genetic similarities show that the modern human species,Homo sapiens, has a very close relationship to another group of primate species, the apes. Humans and the great apes (large apes) of Africa — chimpanzees (including bonobos, or so-called “pygmy chimpanzees”) and gorillas — share a common ancestor that lived between 8 and 6 million years ago.

Humans first evolved in Africa, and much of human evolution occurred on that continent. The fossils of early humans who lived between 6 and 2 million years ago come entirely from Africa. At one point in human history, around 40,000 years ago, modern humans must have shared the planet with at least four other human cousins:

Evolution occurs when there is change in the genetic material — the chemical molecule, DNA — which is inherited from the parents, and especially in the proportions of different genes in a population.

Genes represent the segments of DNA that provide the chemical code for producing proteins. Information contained in the DNA can change by a process known as mutation. The way particular genes are expressed – that is, how they influence the body or behavior of an organism — can also change.

Genes affect how the body and behavior of an organism develop during its life, and this is why genetically inherited characteristics can influence the likelihood of an organism’s survival and reproduction.

Our most common male ancestor, ‘Adam’, has finally got his original birth date – and its 9,000 years earlier than scientists believed.

Their findings put ‘Adam’ within the time frame of his other half ‘Eve’, the genetic maternal ancestor of mankind.

Here is worth mentioning. The Big Bang Theory. Life not Us.

A concept which seeks to explain the origin of the universe, claiming that billions of years ago all the matter and energy in the universe was condensed into a particle no bigger than a pin-head.

No one knows where it came from and why for some unknown reason it exploded.

So there you have it without the Religious Theories, thank God. 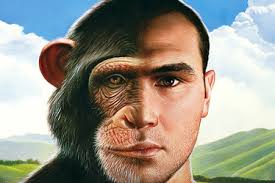