After twelve years and 10 billion in six months’ time (if everything works ) we are going with the help of the James Webb Infrared Space Telescope peer into the past to see our future.

Unless you happen to live on one of the plants that the telescope will exam you will have noticed that this planet is in trouble sustaining the life it has on it at present.

THE REASONS FOR THIS REST IN MULTIPLE BARRIERS. TO MANY TO ADDRESS HERE OR IN ANY FUTURE CLIMATE CHANGE CONFERENCES.

LEAVING THESE PROBLEMS ASIDE.

HERE IS AN IDEA THAT PROVIDES AN FAIR WAY OF ADDRESSING THE PROBLEM OF – WHO SHOULD CARRY THE CAN.

The world as we know it is a product that is in the process of being digitalized by technology and the current pandemic.

What is needed to tackle Climat Change is a perpetual fund that does not have to beg, which allows everyone to contribute according to their means.

Every country has government-operating lotteries and bonds.

There is around 160 Lottery in the world offering billions in prizes. They offer a one-off chance with a lottery ticket to win with the ticket becoming a worthless sheet of toilet paper after the draw, raising billions in revenue.

So what is there to stop the United Nations from creating and underwriting its own World Green Bonds, with guaranteed interest and lotto-style cash prizes drawn every month.

(A government bond is a type of debt-based investment, where you loan money to a government in return for an agreed rate of interest. This makes bonds a fixed-income asset. Once the bond expires, you’ll get back to your original investment.)

To compete with the Lotto.

The UN Green Bonds could be issued with 8 years of tenure and 5 years of lock-in. (Premature redemption requests will not be allowed)

The bond can be bought by acquiring coupons that add up to a bond.

These coupons can be purchased both online and offline at the same price as a lotto ticket.

On reaching one hundred coupons an investor gets an acknowledged receipt of the purchase and a bond.  Then he receives the soft copy of the certificate to his/ her registered email address, a few days later a certificate bond gets issued.

This Certified Bond is then eligible to enter the yearly draw to win 20 million. The coupon is dated and numbered entering a Cash prize monthly or weekly draw like the lotto.

Like the Lotto is the prize is not won it rolls over to the next draw with an additional 20 million.

The owner submits the certified bond online with his chosen lotto numbers.

If the investor does not win the additional value from holding the green asset bond derives from enhanced transparency and association with a green project financed by the bond.

The role of the UN would be to the underwriter.

To evaluate financial risks, rates, and rules for a loan or investment for a project that meets certain pre-established environmental criteria.

Surety for bonds issues could be not just governments. Digital monopolies like Facebook, Net Flick, Apple, Microsoft, Drug Companies, etc. could be the financial Surety anchors.

As world economies feel the negative effects of the pandemic the threat of inflation is gathering pace.  On the other hand, Green conversion is also gathering pace.

This idea would let all of us invest digital, or not in the future while earning a fixed interest from that investment and if lucky win a cash prize. 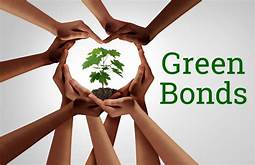 Europe has fostered an engaged and active green bond market so why not for the whole world.

All comments are appreciated. All creative suggestions to improve on the idea are welcome. All like clicks and abuse chucked in the bin.

2 thoughts on “THE BEADY EYE SAYS : WE ALL WANT IT BUT NO ONE WANT TO PAY FOR IT.”